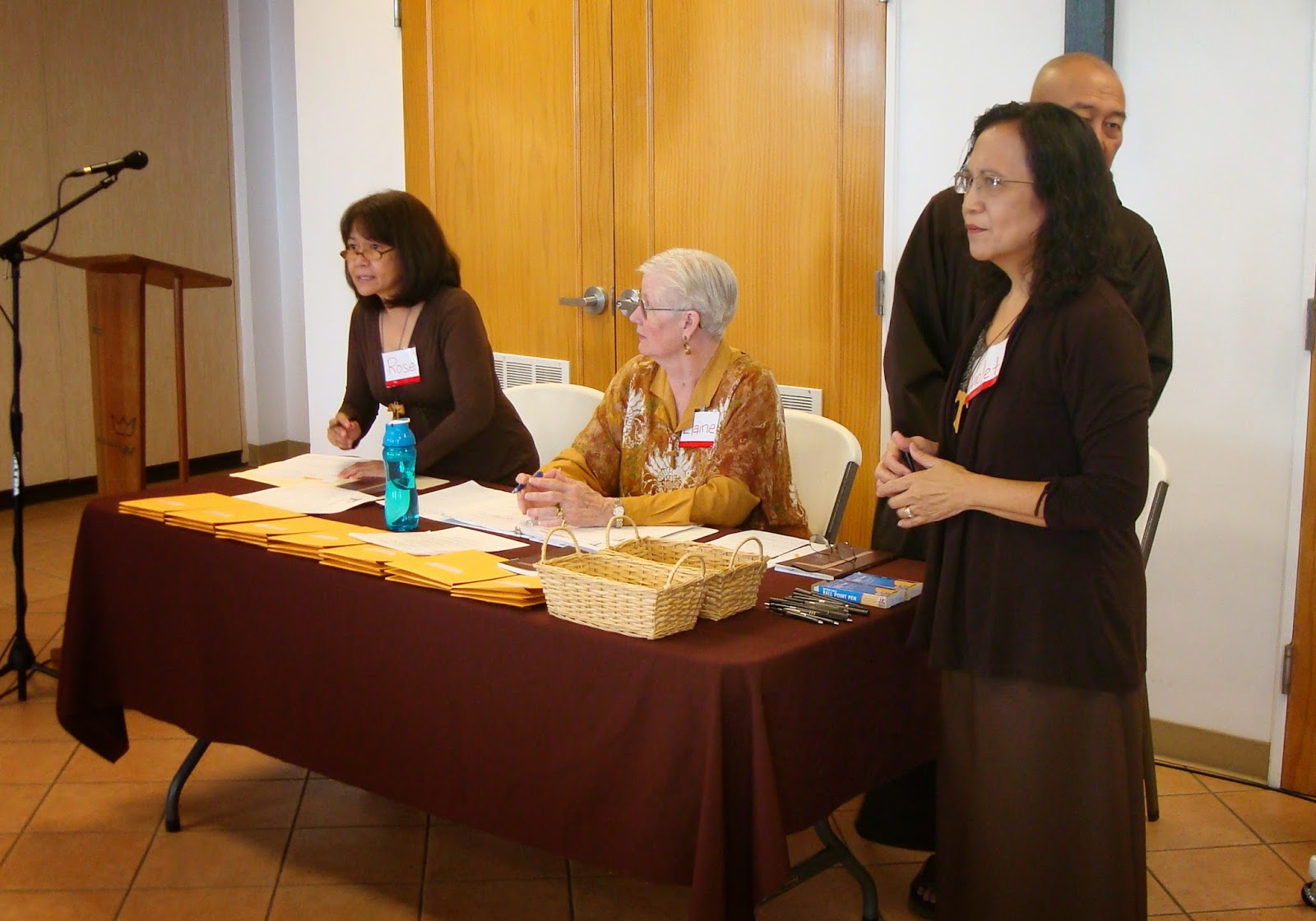 The Secular Franciscans (Padre Pio Fraternity) on Guam gathered at the Friary on September 13 to elect their leadership. In attendance was a representative from the leadership team in the United States. 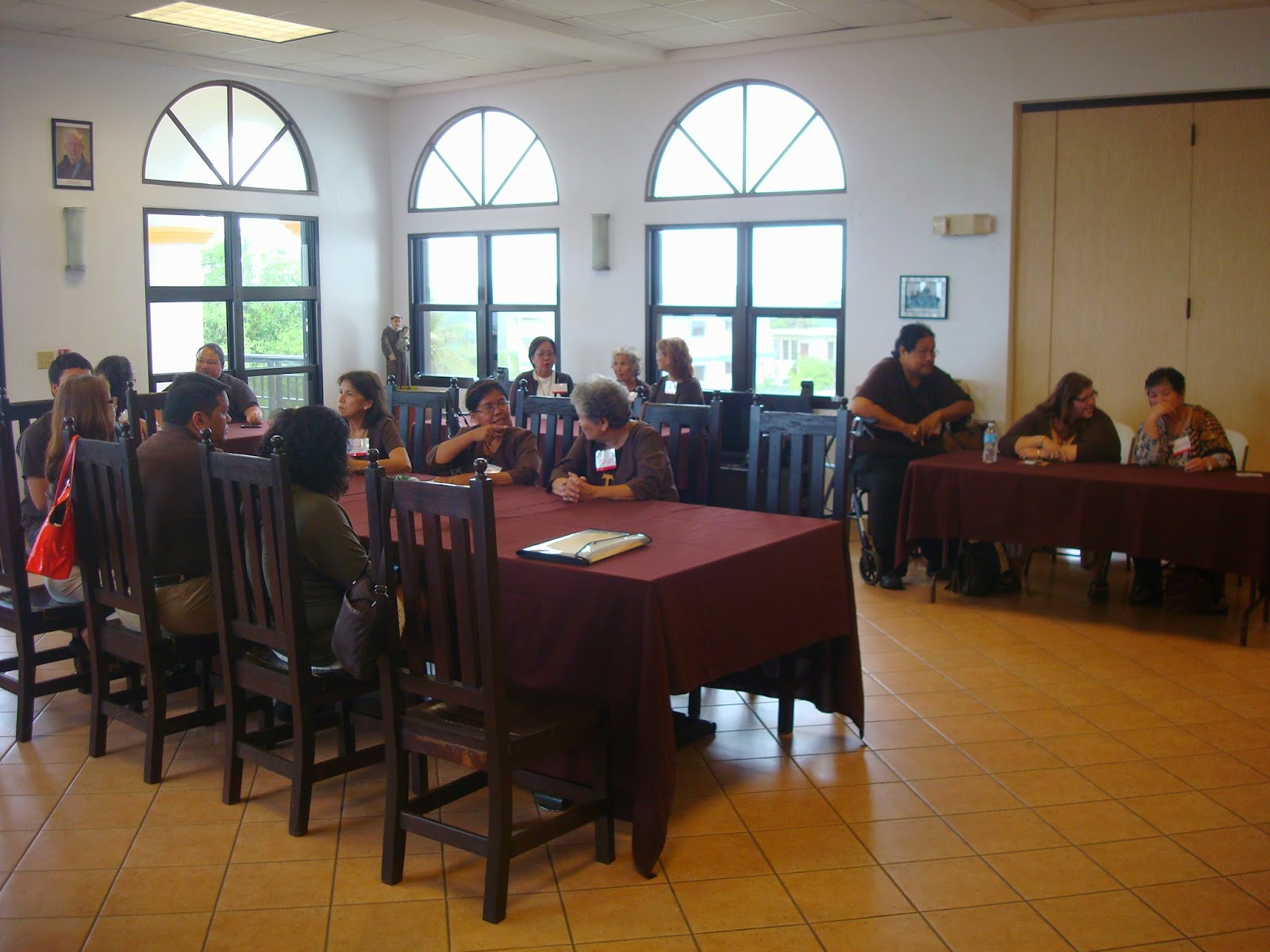 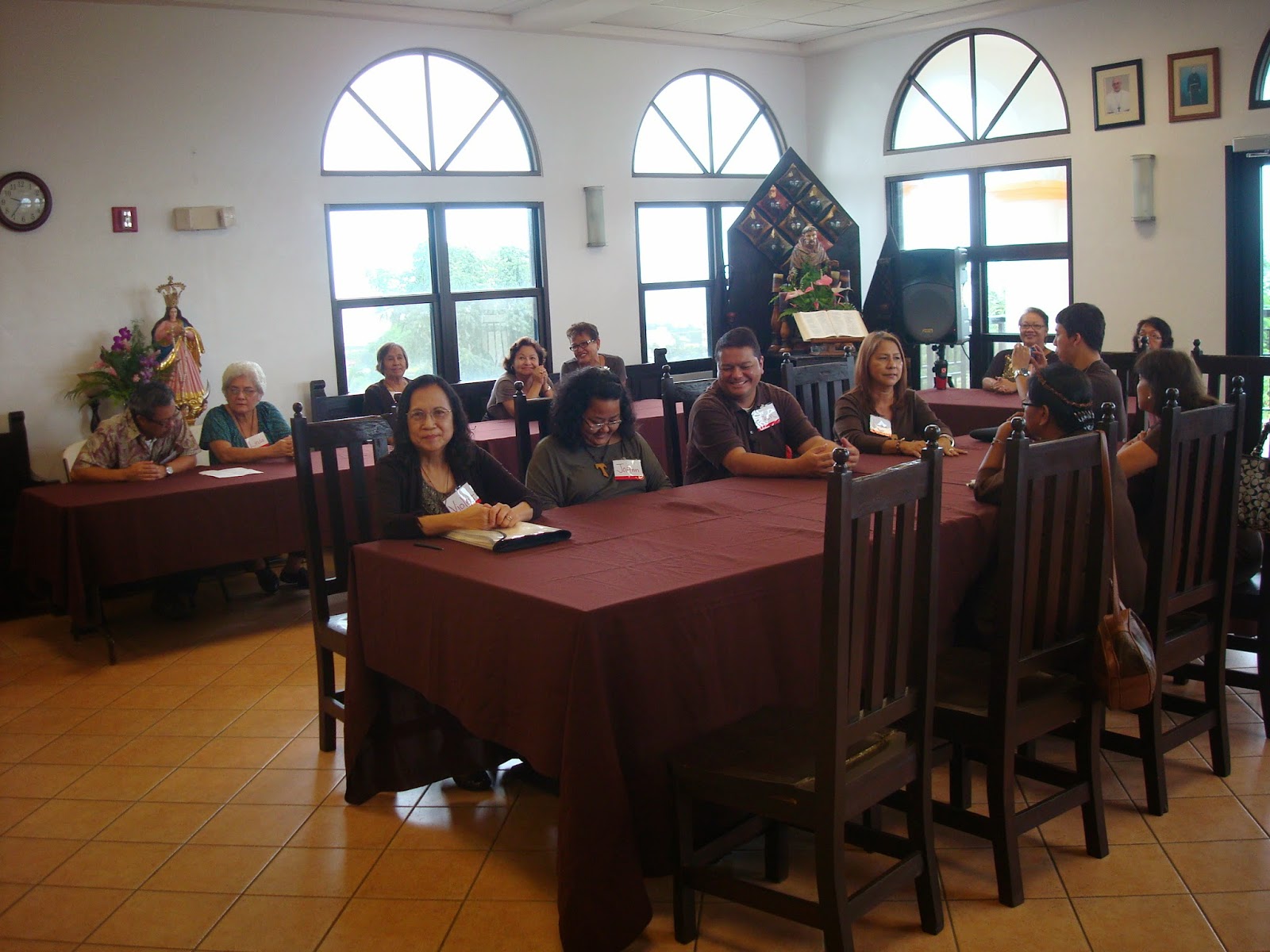 Posted by paleric at 7:20 PM No comments: 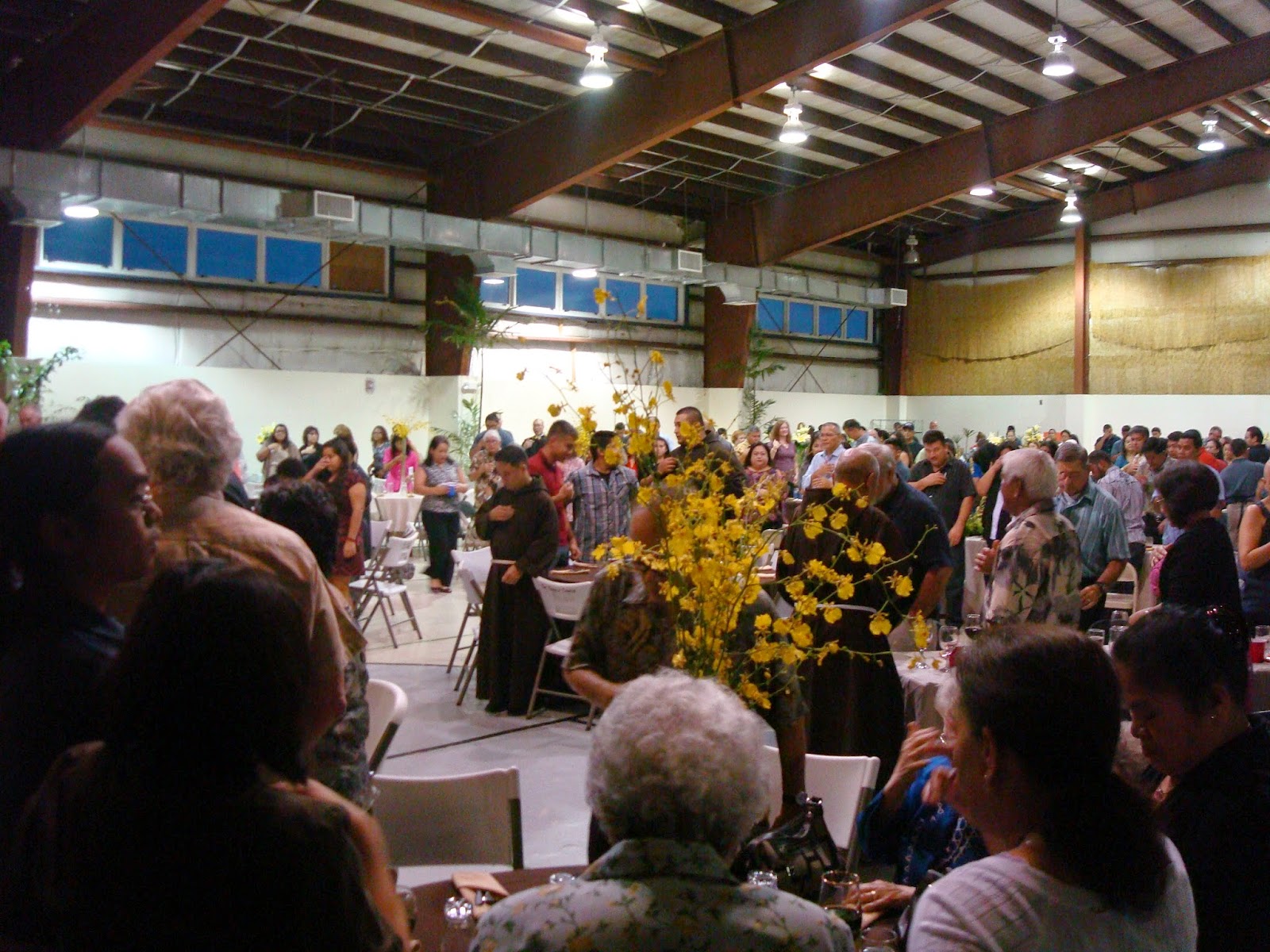 Every year it gets bigger and bigger.

In order to raise funds for the loan repayment for the building of the new friary in 2007, the friars hold a Founders Day benefit dinner every August. The first friars (the Founders) came to Guam in August of 1901.

Thanks to the heroic work of many volunteers, the dinners are always a huge success. Many people look forward to it every year. 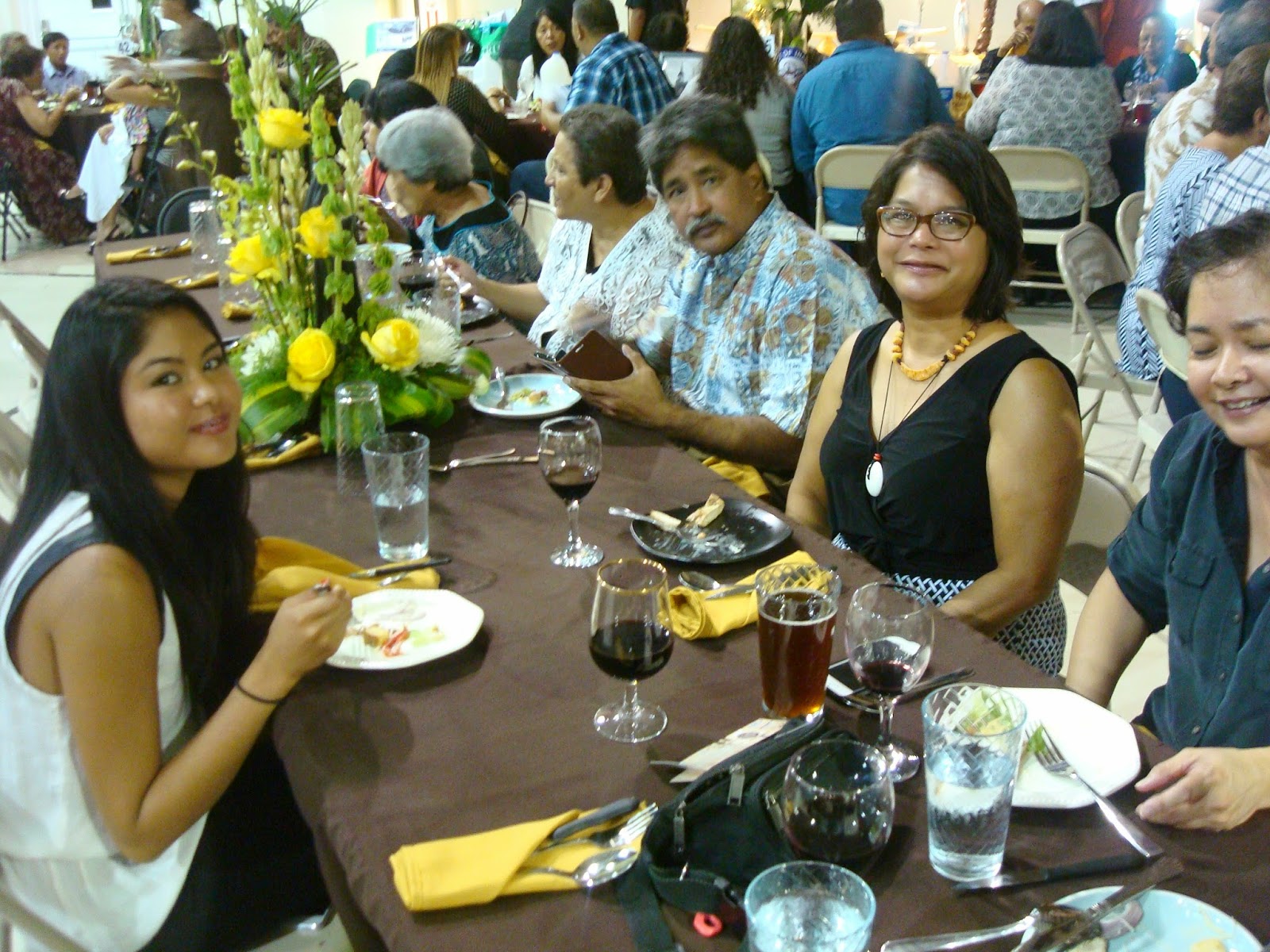 The dinner, held at Saint Francis School's cafeteria, is beautifully decorated. A hotel-rank chef prepares the dinner for over 400 guests.

Besides the great food, drink and company, auction items,prizes and entertainment make for a merry time. 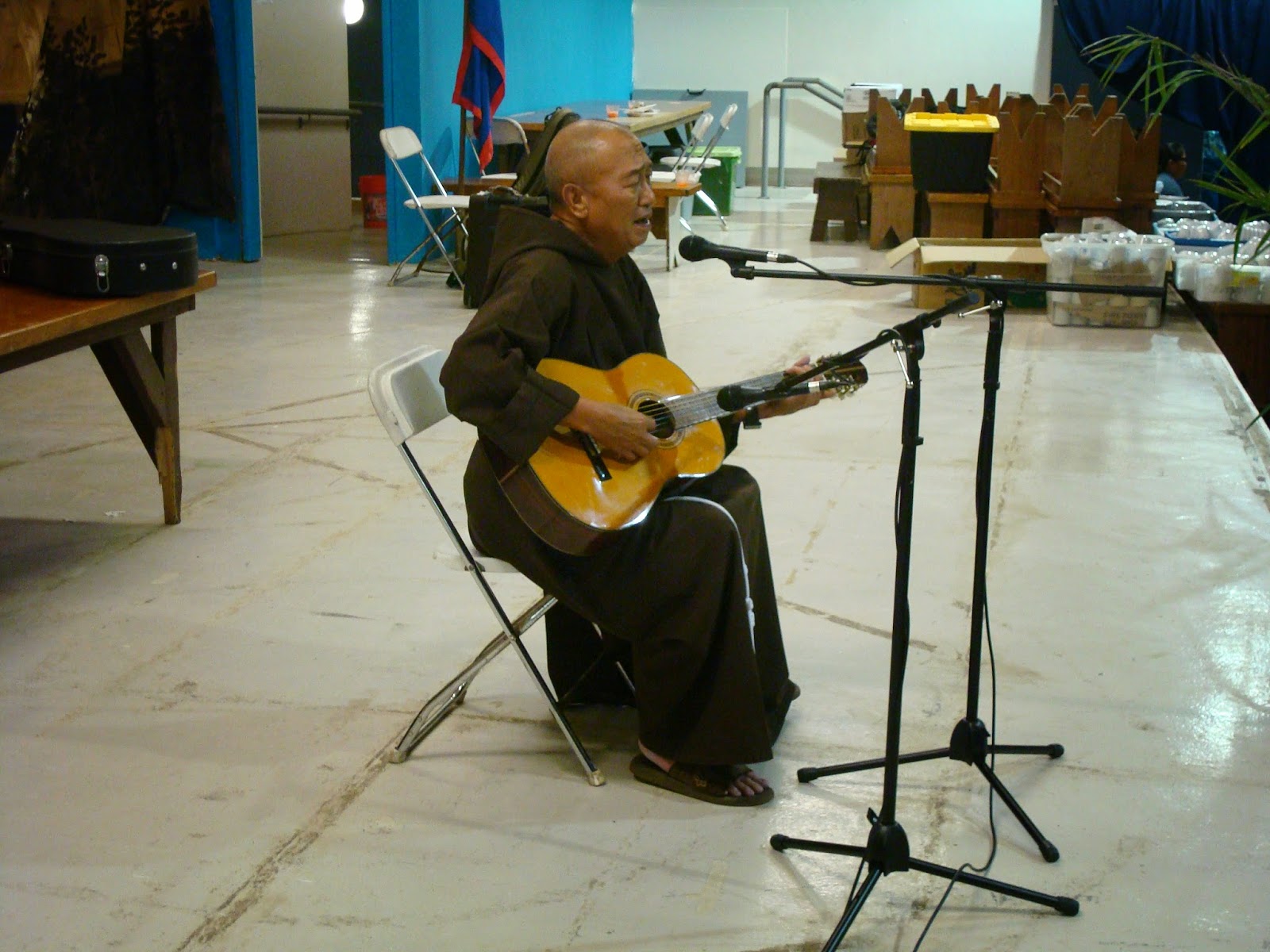 Father Jose Villagomez is one of several performers at the dinner, but also a regular as well as a favorite performer.
Posted by paleric at 7:16 PM No comments: 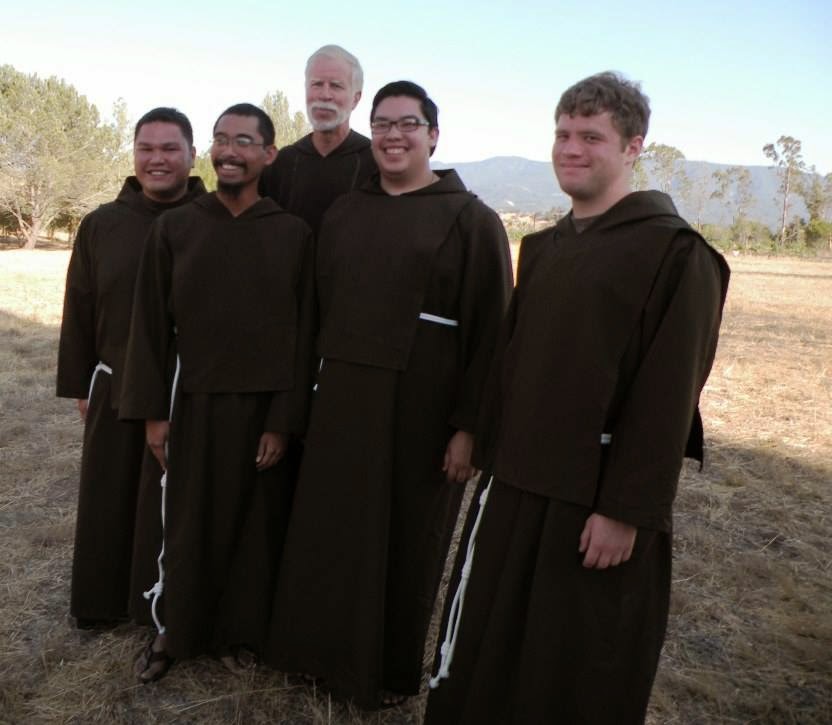 On July 20, four young men from Guam were invested as novices of the Capuchin Order. The novitiate is a year of intense prayer and study of the Capuchin life. The novitiate for the U.S., which includes Guam, and also Australia and English-speaking Canada, is now based in the quiet, peaceful countryside of Santa Ynez, California. At times, England and Ireland send their novices to Santa Ynez. 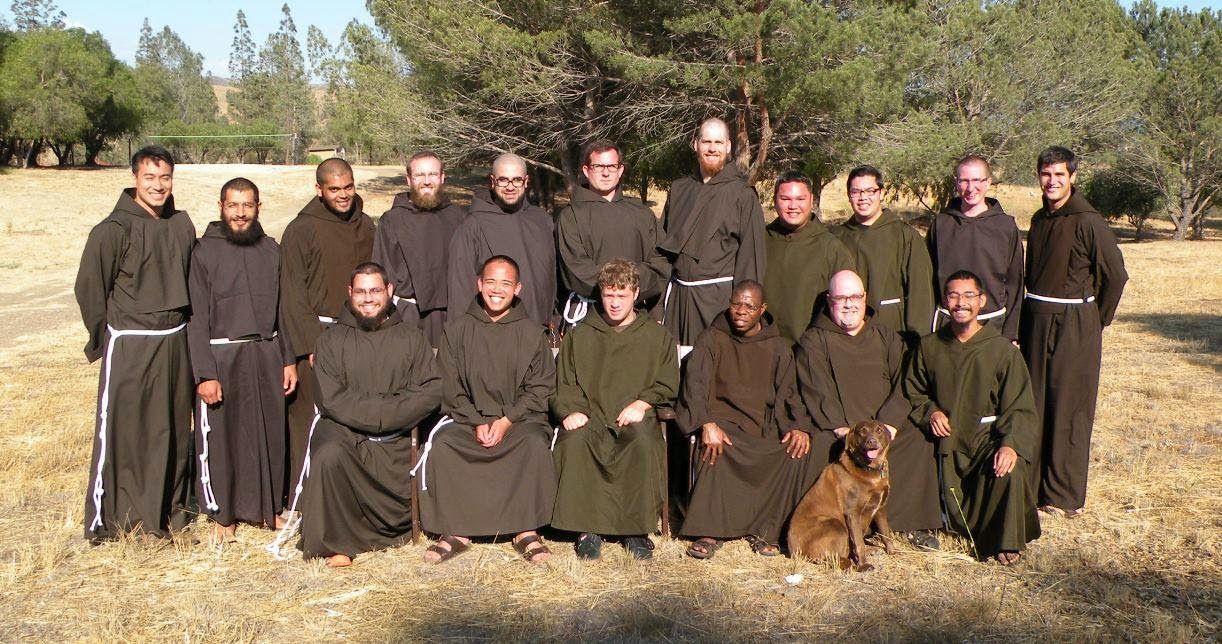 For some years now, the United States, Guam and Canada have been graced with a couple dozen novices or more. Here is the entire class for the novitiate year 2014-2015.

Congratulations and our prayerful best wishes!
Posted by paleric at 7:08 PM No comments: 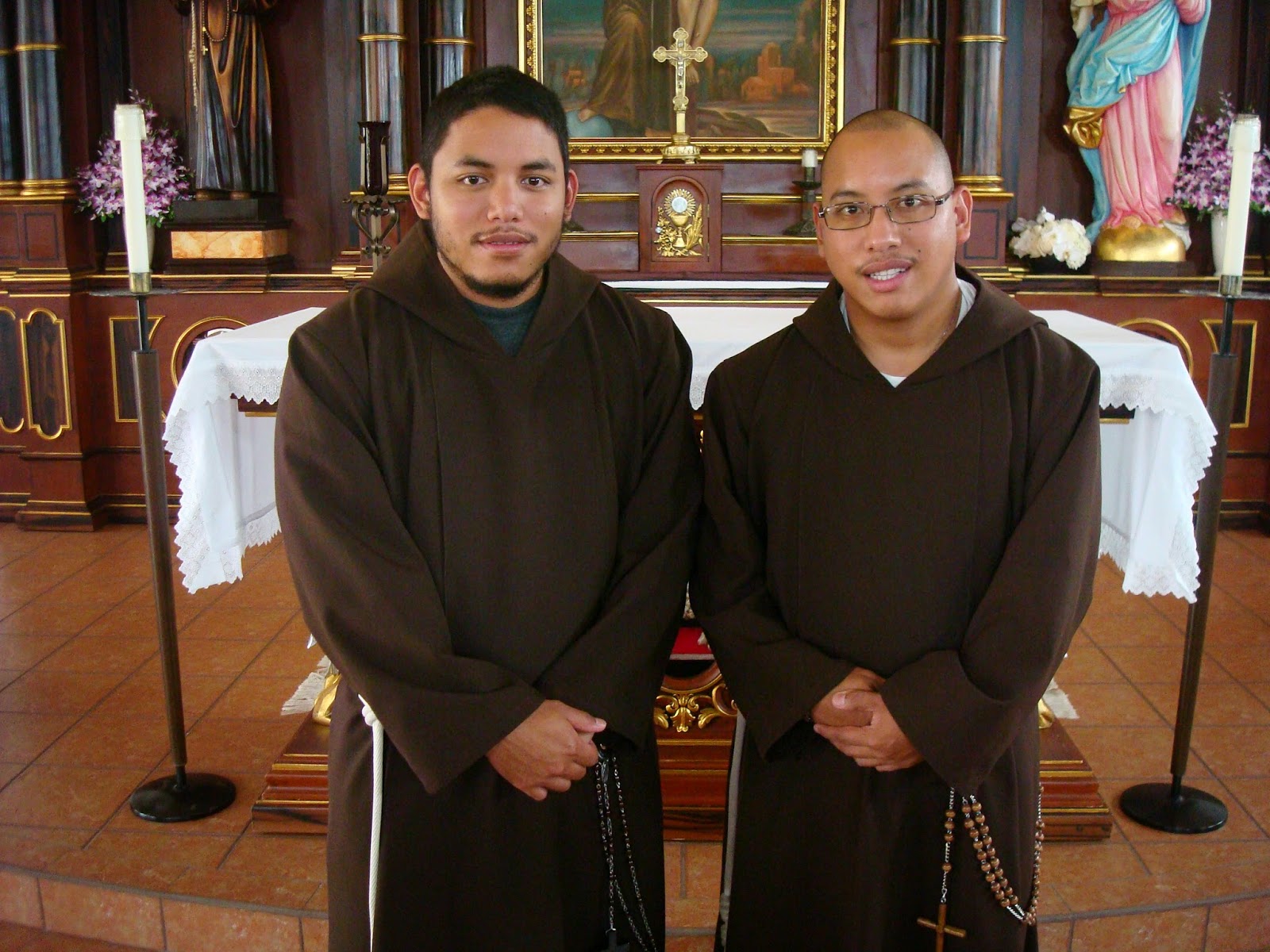 After having completed their year in novitiate in California, Bros William Paulino and Jason Chargualaf returned to Guam in mid July to prepare for their First Profession.  It is the time they pronounce the vows of poverty, chastity and obedience for the first time, and for one year. They still have several years of formation and discernment before they may ask to make these vows for the rest of their lives. 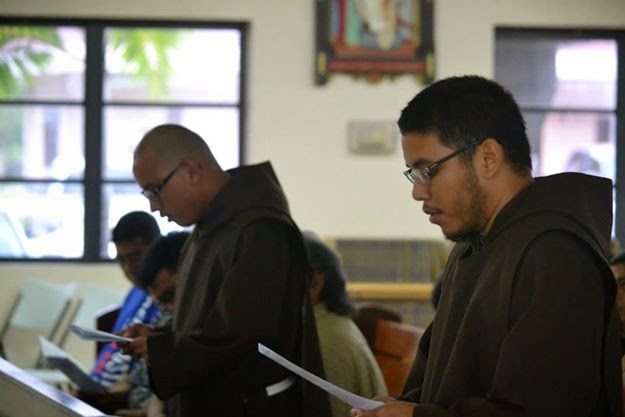 On Thursday, July 31, at Saint Francis Church in Yona, the two brothers made their First Profession before Father Joseph English, our Custos (or Superior). 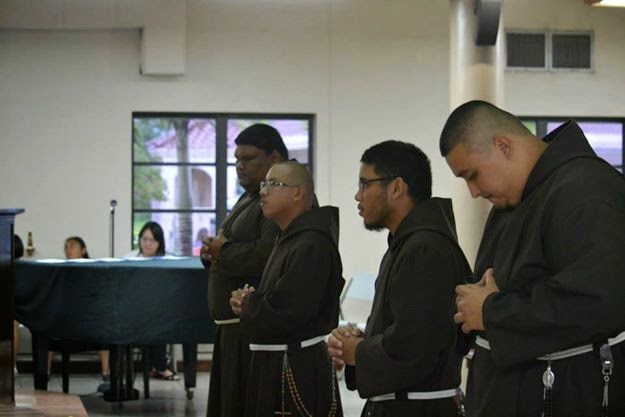 Brothers Ryan Charfauros (far left) and Gavin Diego (far right), who made their First Profession some years ago, renewed their temporary professions at the same ceremony. 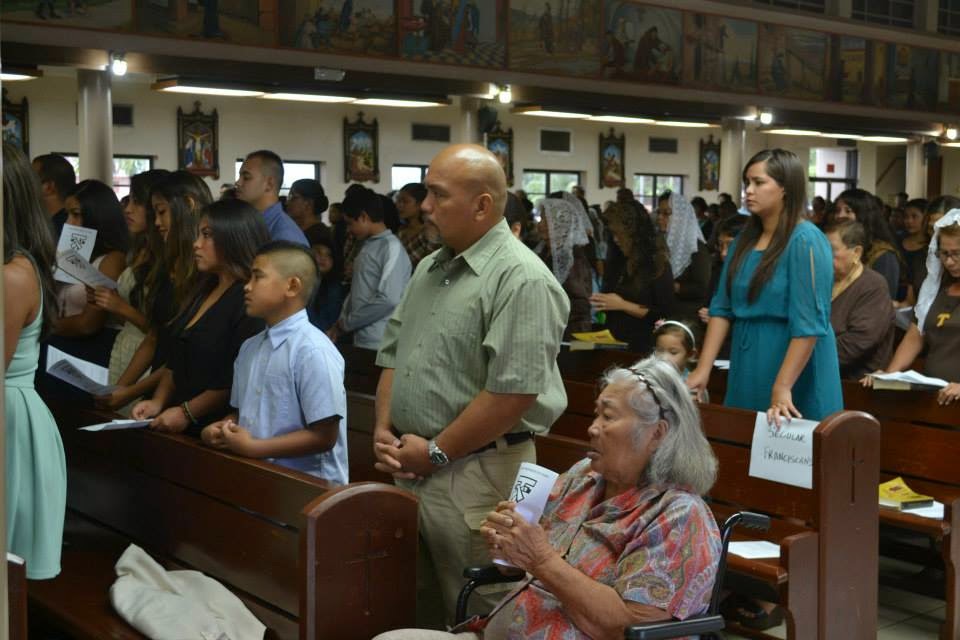 The church overflowed with family and friends. 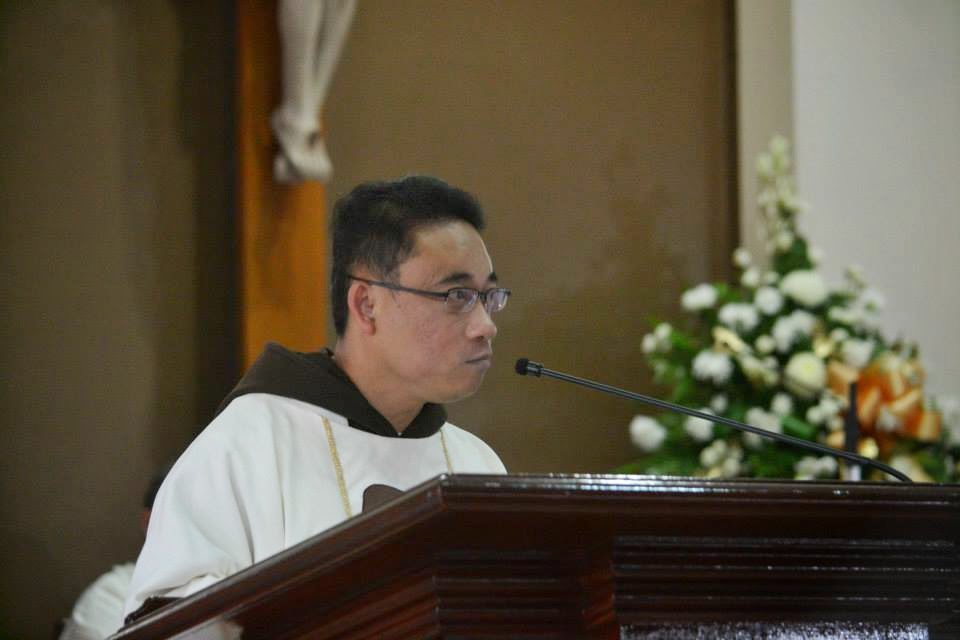 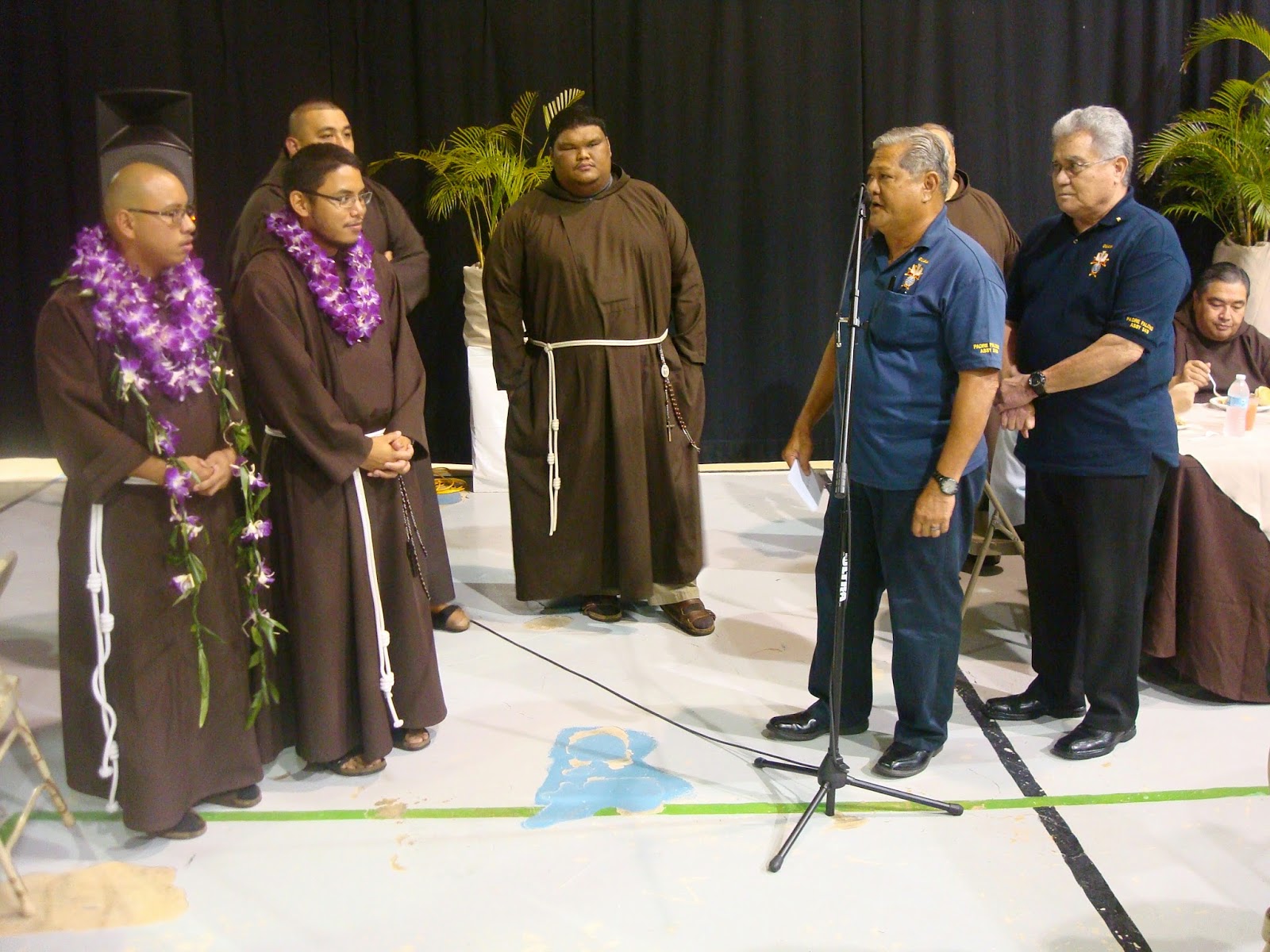 At the dinner after Mass, the Knights of Columbus gave the brothers a donation to help with the expenses of their education. Thanks, Knights!

And congratulations, Brothers William and Jason, Ryan and Gavin!
Posted by paleric at 7:00 PM No comments: