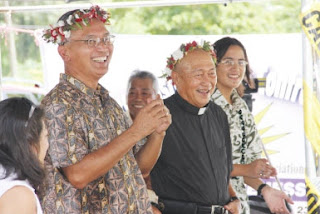 Twenty-five years ago, a new, modern hospital was opened on Saipan to serve the Northern Marianas called the Commonwealth Health Center (CHC).  Years before it opened, a board was founded to plan for the design and building of that hospital - the Commonwealth Health Coordinating Council.  From 1980 till 1986, a Capuchin from Saipan, Father Jose G. Villagomez, was chairman of that Council.

Last Friday, August 31, Fr. Jose was honored by the Commonwealth for his service many years ago.  The Acting Governor and the CEO of the hospital were in attendance, and a joint resolution commending Fr. Jose was presented by the 17th Commonwealth Legislature.

Father Jose, who now serves as pastor of Saint Francis Church in Yona, Guam, said he was "humbled and appreciative" of this recognition. 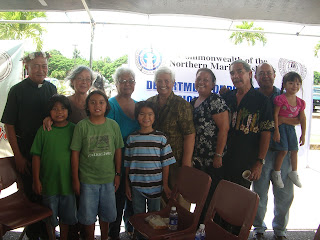 Father Jose was joined at the ceremony by members of his family. 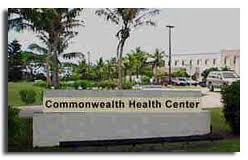